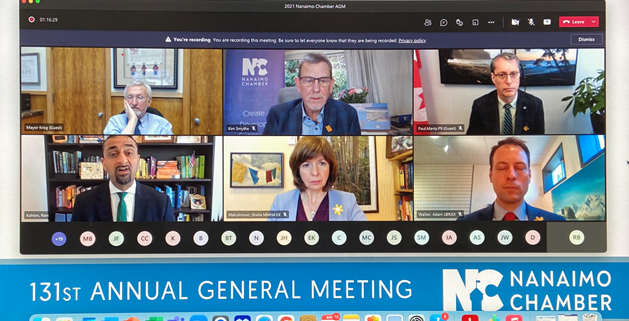 While I have some remarks published in the report you’ve all received, I wanted to depart from that and use my minute or two here to comment on some of the details of the year 2020. Starting March 13 last year, our world went into a spin nobody could have forecasted. At the Chamber, we were busy planning our 50 plus events for the year – from networking activities, monthly luncheons, ceo breakfasts, and the biggies like Business Expo, Business Awards, and of course the Commercial Street Night Market. Instead, we had two breakfasts and one luncheon done by that time. Fortunately, we were given a brief reprieve in the summer and received the PHO’s blessing to hold our golf tournament – much to the delight, no – glee — of our 80 golfers. Staff mentioned it was like watching kids AT the first snowfall of the year!

We shifted gears upon discovering that what people wanted most was information and knowledge which saw us enter into “uber communications” mode. We produced 13 weekly webinars from March to June interviewing the people who mattered the most – government & community leaders, and the folks who would help businesses the most in securing support funding to help them survive what we didn’t know enough about to know what was coming next. We increased our NewsLine enews from a single issue with five stories a week to a daily issue with twenty-five stories a week and our readership went up 5,000%. We pulled off a virtual Business Awards show with the help of Steve Patterson of CBC’s “The Debaters”. Our workload in government advocacy went sky high as we collaborated with the BC Chamber and provincial ministries to ensure business had the best chance to survive and thrive. And we ended the year on a positive note financially.

Thanks to Chamber staff who really moved fluidly amidst all the changes we needed to make, to our contractors who did the same, to volunteers who persevered, to our colleagues and partners in business and government. Especially to civic leaders in governance and the bureaucracy as we worked together on the Health and Housing Task Force, Economic Development Task Force, the reformation of Tourism Nanaimo and development of a new BIA.

Among the changes we went through, perhaps the most significant was the board’s decision to look towards the future and our needs for space which resulted in the sale of our building in early 2021 with the intent to purchase property in the city center with proceeds from the sale and make an equity investment in downtown revitalization. While the sale has been completed, the Chamber will not be moving until we’ve found the best space possible that will allow the Chamber to continue serving its members while also paying respect to the membership and past board members and leaders who created the legacy we enjoy now.

A Commentary from the Business and Tourism Sector
Scroll to top