The City of Nanaimo is a community of 90,000 located on the east side of Vancouver Island, approximately 110 km north of Victoria, and a short 15 minute flight from Vancouver. The Regional District of Nanaimo has a population of approximately 150,000. The primary trading and services area served by Nanaimo is the 400,000 people living north of the Malahat – about half of Vancouver Island!

Nanaimo was first settled thousands of years ago by the Coast Salish Peoples who named the area “Sne-ney-mous” which means “a meeting or gathering place”. The Coast Salish traveled from villages along the Nanaimo River and False Narrows to build longhouses at Departure Bay. The Snuneymuxw First Nation is one of the largest Nations in B.C. with a population of over 1,700 people. Snuneymuxw territory encompasses one of the most productive and resource rich areas at the heart of the Salish Sea. Change began with Imperial Spain’s explorers charting these coastal waters in 1791. Control over the area passed to the British Empire in the early 19th century and the first settlers arrived in the early 1800’s and set up a trading post, which established Nanaimo as an important hub of commerce. A fort was erected by the Hudson’s Bay Company in 1853 and is now a restored landmark. From 1852 until 1952, Nanaimo was primarily a coal town. Originally, coal-burning ships refueled here and coal was exported in large quantities from numerous mines in the area. The City of Nanaimo was incorporated as a municipality in 1874. By the middle of the 20th century, increased demand for lumber and a declining need for coal brought the area’s thriving forests to the forefront. Nanaimo’s fishery also maintained a high profile as an economic driver during this time. Around the turn of the millennium, economic conditions were changing dramatically and resource industries started to lose their position as the driving forces of business and employment in the region. Nanaimo has since risen in prominence as a centre for education, health care, government services, tech innovation & development, communications, tourism and as a transportation centre. This changing economic landscape will shape Nanaimo’s future and its changing demographics. Meanwhile, Nanaimo continues to develop as a centre for the meeting and movement of products and people – a gathering place, as always.

Nanaimo boasts one of the mildest and sunniest climates in Canada, experiencing close to 1850 hours of sunshine annually. The city is protected from Pacific weather systems by a range of mountains which run the length of Vancouver Island. Nanaimo’s climate is also moderated by the Strait of Georgia. The region’s range of moderate precipitation makes it the ideal place for year-round recreational pursuits. You can truly golf, sail, surf and ski all on the same day for many months of the year! 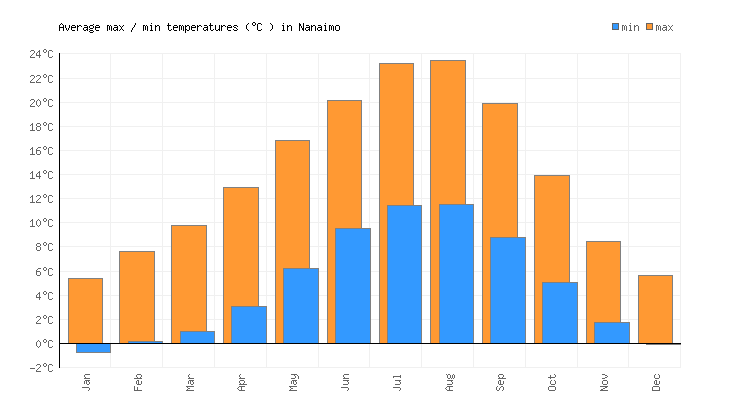 As with Canadian business composition, the majority of the businesses in the Nanaimo region are small to medium size enterprises. Approximately 88 percent of the businesses are small, employing fewer than 19 people; 155 businesses (4%) have more than 50 employees. Businesses operating in Nanaimo are required to have a City of Nanaimo business licence. As of Dec 31, 2015 there were 5,782 licences issued for businesses operating in the city. Most of Nanaimo’s businesses are locally owned operations. 67% describe themselves as locally owned and operated, 3% are franchise operations and 9.49% are branch offices of larger companies. Home-based businesses account for about 36% of total business licences issued. Many people choose to use their home as a “business incubator” to test their initial business ideas and later move into commercial space. The figure below details the number of business licences issued by the city of Nanaimo, by industry sector. As of December 31, 2015, the construction sector had the highest number of licenses, accounting for 17.4% of the total. The retail sector has the second highest number of business licences accounting for 14.0% of the total. The chart does not include unlicensed businesses, government service operations, or not-for-profit organizations. City of Nanaimo data includes businesses of every size including single proprietors. 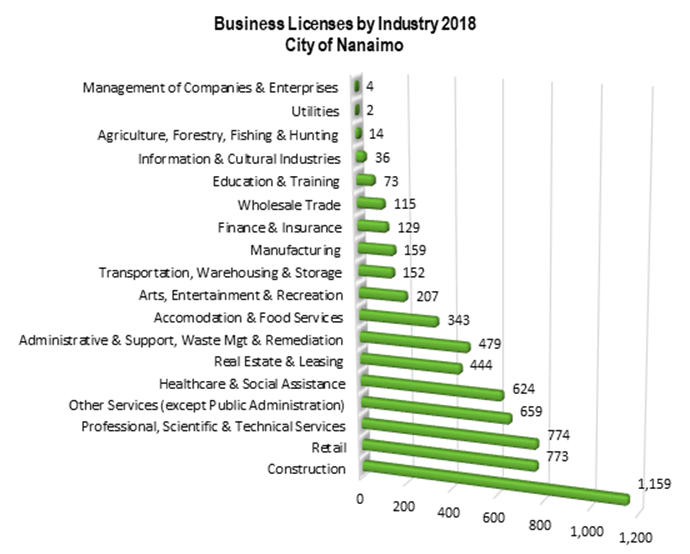 Nanaimo’s location has helped the city develop as an important retail, service, transportation and distribution centre for central and northern Vancouver Island. The city has about 57% of the Nanaimo Regional District population, but has 75% of the region’s retail and service floor space. The city’s primary trade area comprises about 154,495 people drawn from the Nanaimo Regional District and the town of Ladysmith. This trade area has been growing due to population growth. On average, the primary trade area grew by 5.7% between 2006 and 2011.