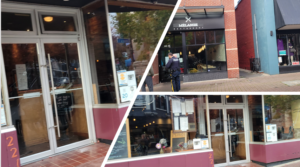 REACTION TO VAX PASSPORTS, OR…

It doesn’t take much to set some people off during a pandemic, at least that’s how it seems from some of the outrageous behaviours we’re seeing. It’s just so unfortunate that these minor acts have an enormous impact, with near-zero return on investment for the idiot perpetrators other than public dismay.

Of course, we’re talking about last week’s round of vandalism at three downtown, family-run restaurants, each with highly popular followings, who became the victims of senseless property damage. Were these totally random acts of violence? Not likely, the proximity of the three restaurants along with a physical connection through a darkened walkway and darker roadway would suggest that once the idea came to mind, this location would be the one to attract the most attention post-event and get the least attention during the act.

Was it really a statement against vaccine passport health orders? Probably not, considering there are 150+ restaurants and bars in Nanaimo complying with the provincial orders enacted to keep everyone operating. Why these three among 150? Again, opportunity for some brain-dead fools to gain petty bragging rights amongst themselves and the little group of loser-supporters they may have. Cause a lot of grief, make some noise, get some headlines, run/bike/drive away in the dark snickering.

Risk of getting caught? Near zero. Risk of getting in real trouble? Same. Cost to the downtown business? An alarming call in the middle of the night, sickness at the thought of yet another assault, inconvenience, expense and the guarantee your insurance goes up again next year. It’s the support of the community and customers that will convince these local operators to stick it out.

Restaurants, gyms, entertainment venues and everyone else who is complying with provincial health orders know they are doing it so all businesses can stay open, employment is sustained, our health is protected and the economy keeps moving in Nanaimo. Our business community can’t be threatened and victimized by the criminality of a very few.

This act wasn’t perpetrated by people miffed at having to show their vaccination status and ID at restaurants — especially at these three establishments. This demonstration of ignorance came from the same people who light fires for fun, threaten and attack the most vulnerable, burglarize businesses, break into your cars and shoplift seemingly at will. This is just another annoying weapon they’ve added to their arsenal.

The stronger we all are in support of businesses doing the right thing so we can get out of this someday, the smaller the argument that these ******* can pretend to get behind.