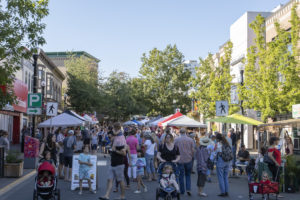 Considered a huge success again, we’re incredibly happy that it brings together so many community members in an outstanding celebration of pride-of-place.

In May, the Nanaimo Chamber was the proud recipient of the BC Chamber Executives’ Award for Community & Member Engagement among ‘large’ Chambers in the province. This Award recognized the efforts of our staff and our many volunteers – from board members to Ambassadors to our event volunteers.

Considered for the 2019 Award were the Chamber’s efforts in non-partisan, civic leadership and government advocacy activities. The Chamber was lead organizer of many All-Candidate election events in Nanaimo for the past few years. In the lead-up to the 2018 municipal election we produced a series of Civic Leadership Workshops and presented widely-attended All-Candidate “meet and greets” and candidate debates.

Another consideration was the Chamber’s role in representing the voice of business addressing increasing homelessness problems, plus consequences to our community overall and the business community in particular. The Chamber has a seat on the City’s Homeless Coalition and Emergency Shelter Community Advisory Committees and looks forward to continuing to work on short and long-term solutions. While we are a compassionate community, safety and security for businesses and residents are a primary priority and core value of the Chamber.

The 2018 Commercial Street Night Market was also highlighted by judges – an event that went a long way to seeing Nanaimo’s downtown take some steps toward renewal. This event was so successful that we’ll all be enjoying a bigger, better, more fantastic version this summer.

Our gratitude to all who played a part in these or any of our other Chamber successes – and there are many! It’s been a great honour for the Chamber to work in the community over the years to earn this provincial recognition.